If You are Reacting to Them, It’s Probably About You

Home/Acceptance, Emotions, FEATURED, Reacting, Relationships/If You are Reacting to Them, It’s Probably About You
Previous Next

If You are Reacting to Them, It’s Probably About You

A few days ago I experienced a real opportunity for growth. This opportunity, which involved reacting, came in the package of an uncomfortable exchange between a close friend and me. At the time, it felt awkward and confrontational, but later I was able to see it in a different light and learn from it.

Criticism Can be a Catalyst for Change

As I replayed the scene in my mind later over and over again, I looked for loopholes where I was right, and he was wrong. Eventually, I concluded that a statement he made is what triggered me, which led to the discord. I traced it back to him because I think I needed to blame one of us, and he was the likely target. I had forgotten that I was the first one to say something, and his response is what upset me. So, who is really to blame?

The next day when I sat to meditate, the Daily Calm was all about criticism. I listened to Tamara Levitt as she talked about how to gracefully accept criticism and leave the rest but then something miraculous happened. Suddenly I saw the exchange between my friend and me differently. I saw it as having the purpose of helping me see myself more clearly—my actions, my behaviors, and point out where I need to do some work. It wasn’t about him at all.

Looking for a Way Out

My desperate attempt to place blame at his feet was really me being defensive. I don’t think he necessarily wanted to handle it how he did, but in effect, he was criticizing me, and I didn’t want to hear it. My defenses kicked in, and I lashed out. I have been working so hard on myself over the past few years, and I think any reference to my “old self” or unwanted behaviors, makes me feel uncomfortable and even scared. I don’t want to be that person, so if anyone, especially someone close to me sees something in me that I cannot see myself, it doesn’t make me feel good.

Therefore, I am incredibly grateful for this opportunity to see myself in a different light. I know I am not perfect when it comes to controlling other people, but now I also know I have some defensiveness to work on and handling it better when I am triggered by criticism.

It’s All About Me

I think it’s important to remember when we find ourselves obsessing over what the other person did and said, it might really be all about us. I know for me, that situation was all about me. It’s entirely his decision about how he wants to handle things. How he feels about his actions afterward are his business, not mine. My part in this is that I had the opportunity to see that I do not handle criticism well. I can get defensive, and I need to exercise patience, love, and kindness when someone else implies that I am not what I want to be, even if I don’t like how they express it or how they feel about it later. It is not about them it is all about me.

We become so pinpoint focused on them that it can be hard to step back and see it’s really all about us. Especially in relationships (of any kind), people get triggered by other people’s behavior. The only way to fix it is to stop and recognize what is going on and try to do better next time. I prefer the clear, direct approach where everything is right out on the table. Of course, this has to happen with compassion and love and not anger or other motives. Otherwise, it will be an exercise in futility.

Not Everything is as it Seems

It’s easy to look at disagreements in black and white but not really see the underlying issues. My friend’s family has influenced him in such a way that he is oversensitive to certain behaviors. When something I said in the car triggered him, he reacted and then I reacted to his comment and so on. If we look more closely, his comment was a reaction to someone else, not even me. But in the moment when I mimicked the behavior of a family member, his automatic response was to say something that I found hurtful. He was reacting to someone else who was not even there, and I was reacting to his behavior, which he could not even control.

There is so much more going on than what is on the surface. Rarely do we know what is inside another person’s head or what may be influencing them. Often their reactions to us, have nothing to do with us at all.

Every time we start looking outside for the answer, we just need to remember to look inside instead. There is always a lesson to learn, and it always begins with us, not the other person.

Mindfulness Offers an Alternative to Reacting

It’s easy to get caught up in reacting rather than slowing things down and saying what you feel. Changing your behavior to be a better person is not always easy. But, it’s a lot easier with a daily spiritual practice of meditation, mindfulness, and using love and kindness in all areas of life.

I want to share the quote that came along with the criticism meditation. I think there is a lot of value in it: 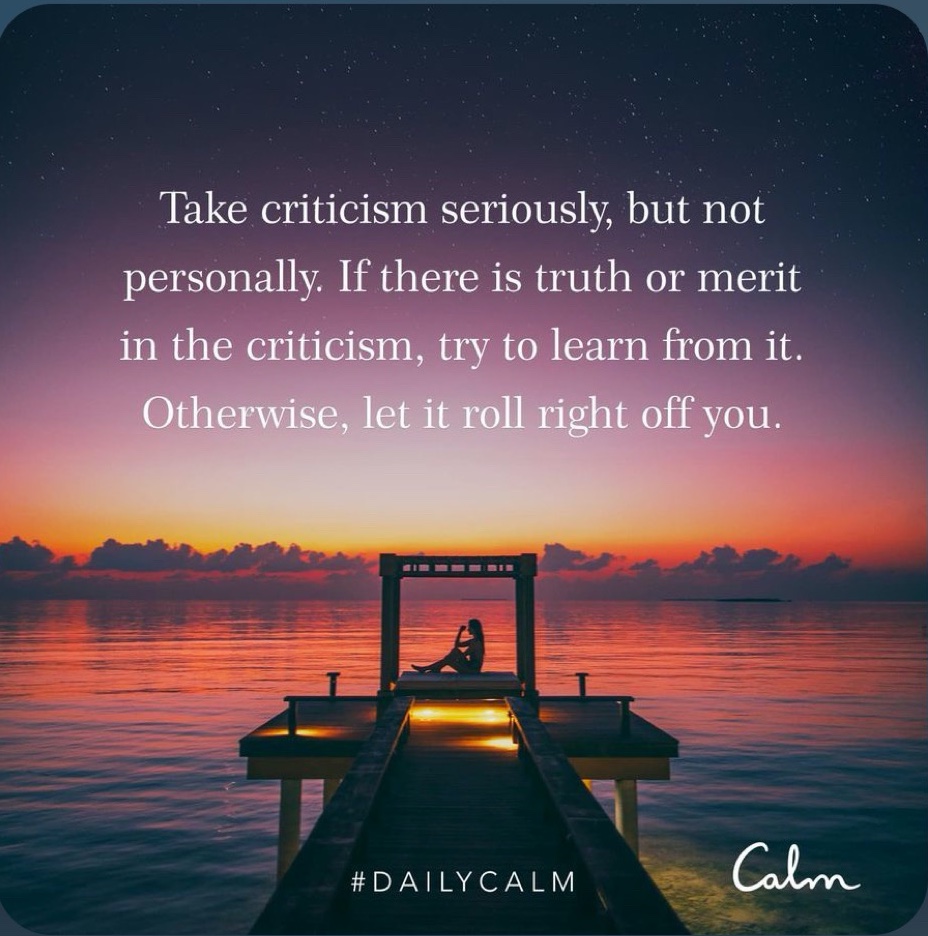 Want more JOY, more SUCCESS, more HEALING and more FREEDOM in your life?
Sign up to get my weekly tips each week, delivered right to your inbox.

Plus, right now get a FREE bonus: the
“Top 10 Relationship Mistakes You are Probably Making”
just for signing up!

EFT has changed my life forever and I will forever be grateful for my awkening.

You are so different now, the changes in you are truly amazing!